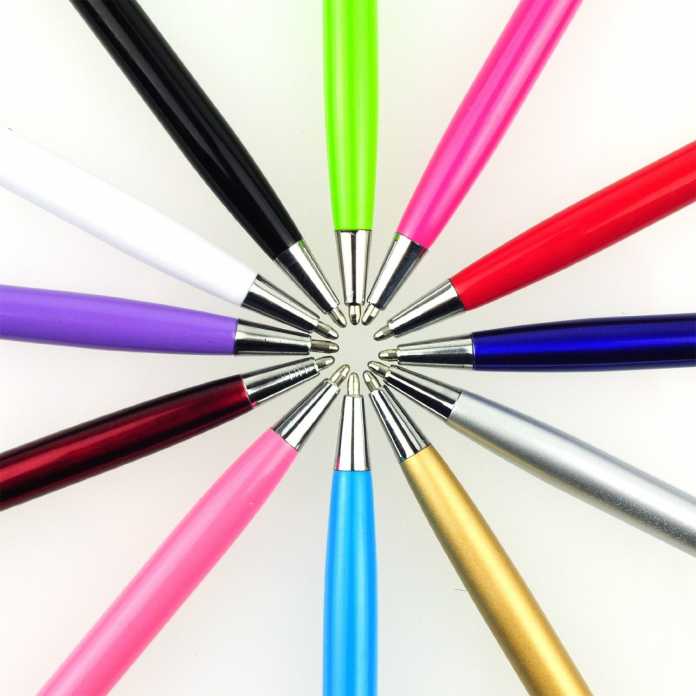 The advance in technology has led to new electronic devices that need a stylus pen to operate.  With iPads already firmly entrenched within the market, the need to use an iPad stylus pen has become unavoidable.  Although a lot of tablets are still not designed with styluses in mind, there are a range of pen styluses available for modern tablets. Many users would love to see more tablets optimized for use with styluses. Today, it’s possible to also find various apps readily available and designed for use with stylus pens. 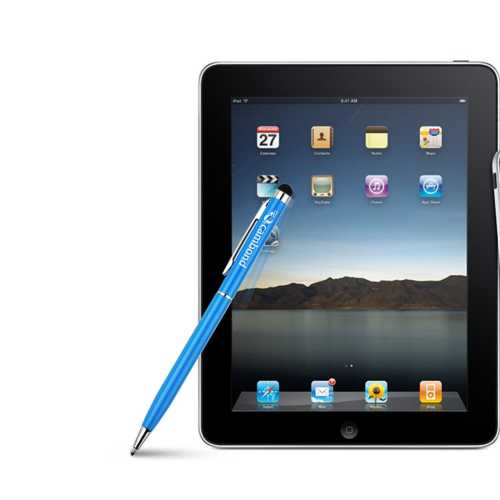 Should you use a stylus pen? What exactly is a stylus? With fingers being oily and dirty, sometimes it can be challenging to use them to scroll on an iPad or tablet. This is where the use of a stylus pen comes in handy.

A stylus is writing implement that works by touch or light pressure rather than ink. A stylus meant for an iPad and tablet looks more like a pen and can be used to select options, draw or write on a touchscreen.

Best Pen Stylus Combo – Different Options Based on Screen & Use

With several different types of touchscreen technology, not all of them use the same stylus pens. Early touchscreens used a plastic stick which is not an acceptable options with the more recent tablets. Modern tablets feature touchscreens that rely on electrical conductivity thus using capacitive styluses that are designed to be conducive is the way to go.

Some of the styluses are designed for writing while others are more designed for drawing and painting. Depending on your need, you will be able to choose the right stylus pen for you. However, this doesn’t mean that a drawing stylus cannot write or vice versa, as long as it’s a capacitive stylus it will trigger any capacitive touchscreen and work effectively. In some circumstances, a stylus can work better for some tasks compared to others.

When it comes to using styluses, there are both pros and cons of using a stylus pen, but the cons are generally rather easy to eliminate if you want to. If you decide to use a pen stylus, it’s essential you understand the advantages and how to maximize the use of the device. As touchscreen technology advances and more devices get designed for this type of use, the use of styluses is becoming unavoidable.

What are the Best Stylus Pens for Artists and Doodlers?

If you are looking for high quality and functional stylus pens, here are Amazon top selling styluses that you should consider investing in. These styluses are perfect to use on your iPad and tablet and are pretty affordable.

These stylus pens come in a 10 pack that features several different of colors. The stylus is perfect to use on all of your modern touchscreen devices such as: 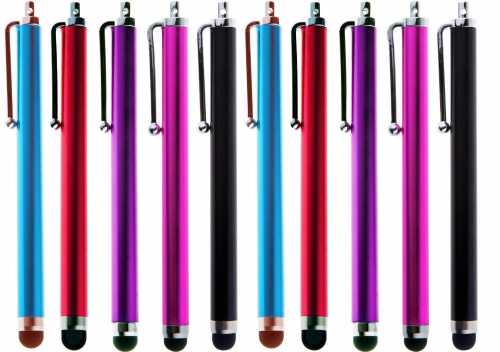 These pens will eliminate your having to waste time selecting pens or pushing the buttons with your fingertips or long nails.  The length of the pen is perfect and extends long enough to rest on the skin between your thumb and index finger which helps in having better control.

The stylus features an innovative tip design that allows precision selection and protects your device from scratches. The pen also clips right to your carrying case or pocket for easy accessibility.  Plus, who can resist the colors?

These styluses have a precision clear disc and a thin fiber tip compared to some of the other standard stylus tips. Due to the material of th 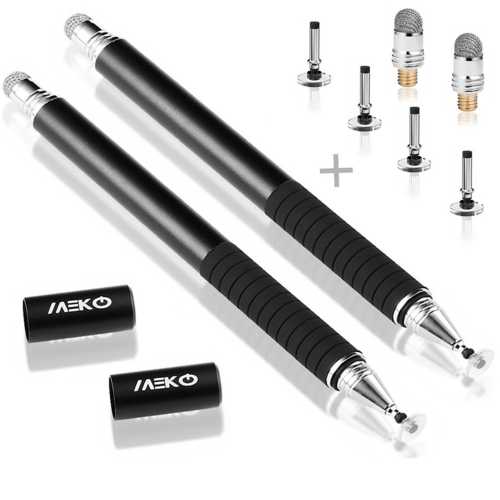 e disc which is conducive hard plastic, you need to make sure both the device screen and disc are clean. This is to avoid dirt catching onto the disc which may result in reduced sensitivity and some cases even scratch your screen.

The Stylus is 100% compatible with all capacitive touchscreen devices; Apple, Android and Windows Smartphone’s and 5V Tablet. The disc touchscreen stylus tip enables you to take notes as well as draw.  And the clear disc allows you to see exactly where your mark is being made and created with incredible precision, giving you the perfect user experience.

The Bargain Depot thin tip pens have a fine point stylus tip compared to other capacitive stylus tips. The stylus is compatible with all capacitive touchscreen devices such as Apple devices, Kinfle touch, Galaxy, Android and Windows smartphones. 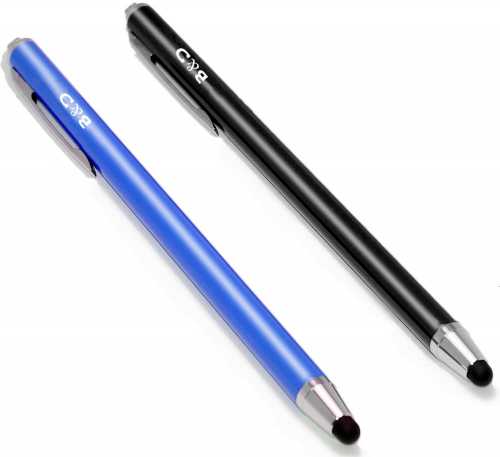 Due to the non-durable nature of the capacitive touchscreen

(iPad, smartphones, etc.) the tip has to be soft. You need to treat the stylus like a small, soft-tipped paint brush and stroke the screen to have greater success when using one.

These styluses can be found in different colors and the packages include 2 styluses as well as 6 extra replaceable soft rubber tips and 1 year warranty.

These colorful 2 in 1 capacitive pens offered by Teviwin work well with touchscreens of a wide variety of digital products. The pen works smoothly and also has 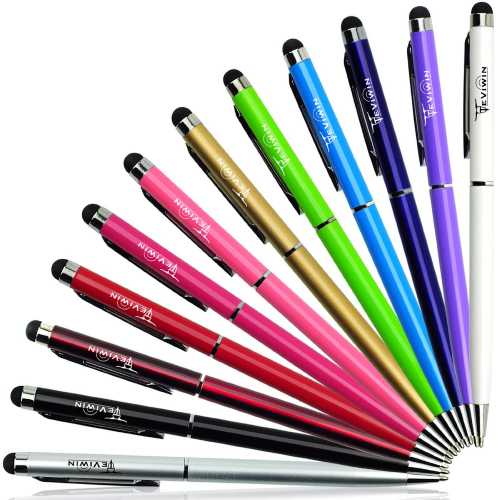 a long lasting and durable quality. With a clip on the pen and a ball pen on the other end, it’s more practical and convenient for use than some of the other options.The benefit of using the Teviwin slim capacitive stylus pens is that it protects the screen from scratching or finger prints and prevent your finger’s skin from becoming dry after a long period of using computers or phones.

The ball pens are designed for convenient use; Light weight, with a clip design which makes them easy to carry. The package includes 12 pieces of stylus in a rainbow of different colors. 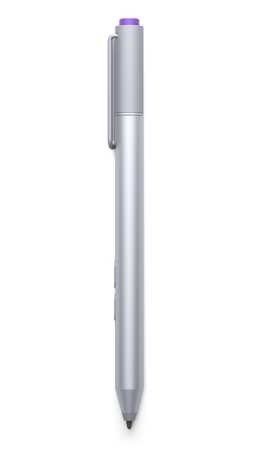 If you are looking for the best stylus for Surface Pro, then this might be the one!  Very elegant looking, more life a fountain pen – you can be working or studying in style with one of these!

Ever worried that a stylus might not allow your tablet to “read” what you are doing correctly?  Well, Microsoft has eliminated a lot of that issue by incorporating “Palm Block technology” so that the Surface Pros knows the difference between what you are writing and anything else. Nice feature, huh?

Wireless connectivity, easy erase buttons as well as the ability to write and draw in a way that suits you, not you having to work with the stylus! 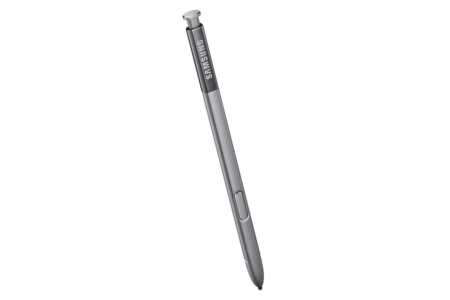 The latest in stylus development are the tablet manufacturers coming out with their own stylus options for their specific products.  Samsung has definitely joined in there (as has Microsoft and Apple, though Apple is calling their’s a “Pencil”).

Samsung claims that once you start using the stylus, you “won’t ever go back” to using the on-screen keyboard.  BIG claims but this is a pretty sweet stylus that can simulate a finger swipe, tap or touch and won’t leave a fingerprint behind!

If you want to make fast notes, sketch something quickly or use the traditional commands – this stylus will do all that for you and more.

While capacitive touch screens are great, one flaw is the inability to use many of the different stylus options. Not anymore! The Amazon Basics Stylus allows you to use your Apple iPad, iPhone, Kindle Touch, Kindle Fire, or just about any other tablet device without ever touching the screen with your finger. 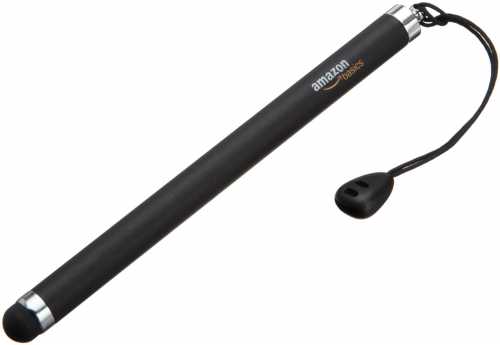 The stylus pen is perfect for the ladies out there who have their nails done, or for those who don’t want to take their gloves off during a cold day.

The Amazon Basics Stylus is conveniently sized with an 8 mm diameter, and designed like a pen to fit just about anywhere. It works when you touch the soft tip of the pen to the small printed links on the Internet or any printed matter on your device. 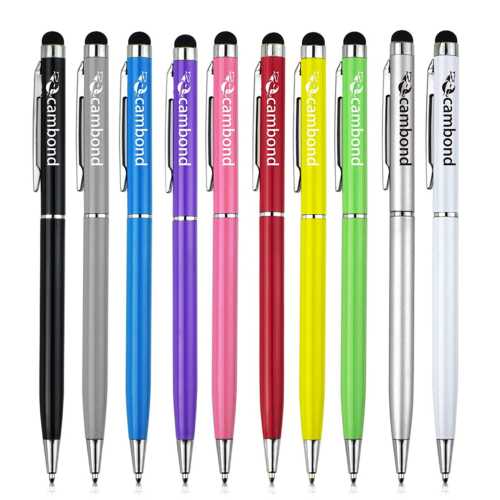 These styluses make it easy to turn a page, pick a movie, draw a picture and keeps pesky fingerprints off your glossy screen. The stylus durable rubber tip connects your brain to your device – requires no power, no drivers and no setup.  Doesn’t that sound about as simple as it gets?

And with a set of 10 cool styles and colors that comes in this one package, you are sure to have plenty to share!

Best Pen and Stylus Combination – What are the Different Types of Stylus You Can Buy?

Like many things in life, there’s not just one option to choose.  In recent years, there’s been an increase in the types and styles of a stylus.

To start with, there are the Passive or Active stylus choices:

Passive Stylus – These can be as passive as using your finger but generally mean a pen styled, or in the case of Apple, a pencil casing for the stylus.  There are no electronic components or features.

Within the Passive stylus category you will find rubber tipped stylus that have rubber tips.  These are your least expensive options and wear out faster due to the rubber tips fraying, smudging and becoming less accurate.

A step up are rubber tip stylus with replaceable tips.  That allows you to have your stylus for longer, just switch out the tips as one wears out.  Definitely more environmentally friendly as well!  Also in this group we can throw in the microfiber tipped stylus group.  Definitely more durable that the rubber tips and far less smudging going on.

And the most recent addition to this type of stylus are the transparent disc stylus.  This clear disc eliminates the bulky and blocking that a rubber or microfiber tip stylus causes.  The discs are like working with a fine tip pen, accurate and effective.

Now that you know what your options are, understand that the more advance and accurate you go, the higher the price point.  However, you also have a longer lasting stylus which might completely eliminate the difference in costs when you figure in replacing one frequently.

Let us know what your thoughts are on these stylus pen combo and which one you have been using so far?  Share in the comments below on let us know on Facebook!