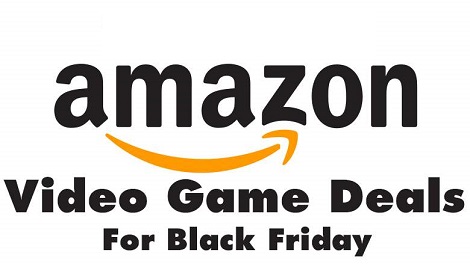 As gamers know most video games are expensive, which makes checking out Amazon Black Friday video games deals a really smart decision! This Black Friday is a great day for gamers to grab games and hardware at amazing discounts.  It’s the perfect time to catch up on games you have missed throughout the year and to upgrade your video game collection. And you can also find some great buys for those video gamers on your holiday shopping list!

Assassin’s Creed is a series that you will definitely love as a gamer enthusiast. The franchise offers some of the most thrilling moments in gaming, letting you scale massive buildings and take down your enemies undetected. This gaming series has moved through the ages with each new release which is a fun twist to the game. You will love the decision of dividing the main role into 2 people.  More about Assassin’s Creed include:

-Take Over The London Underworld – Establish London’s fiercest gang and bring justice to the lawless streets.

-Devastate Your Enemies – Fight with an all-new combat system and weapons like the Cane Sword and the Assassin’s Gauntlet featuring the Hidden Blade and Rope Launcher.

One of the best PlayStation exclusive game franchises of all times. Uncharted is among the Amazon Black Friday Video Games deals up for sale.  You will love playing all the 3 Uncharted games. If you have a PS4 and you have never played Uncharted games because you were an Xbox 3 gamer, here is your chance to experience this. You will love everything about these games; the story, characters, action, adventure and  puzzle solving.

If you love horror and challenge, this is the right game for you. Bloodborne is a game about a terrifying new world where you have to take a journey to a horror filled gothic city and fight with deranged mobs and nightmarish creatures around every corner for survival.  It features a strategic action combat style that consists of an armed, unique arsenal of weaponry including guns and saw cleavers.  There also a new generation of action RPG and ever changing chalice dungeons to explore.

Forza 6 is one of the most beautifully presented console racing games that you should add to your grab list this Black Friday. Forza Motorsport 6 trucks are well raid out and the cars are designed to perfection. The graphics and game play physics are outstanding. This is a fun game to play and look at and with 24 cars on the track, night racing and rain, what could possibly go wrong?  More about this game include:
– Classic Forza racing action.
– The rain dynamic adds to the races.
– No more micro-transactions, you earn everything the good ol’ fashioned way.
– You can finally tune your car before the races again!!!
– Prize spins

List Price:  $59.99 Current Amazon Deal: $29.99 with FREE Shipping.
The design of the game is fantastic, the sprawling wasteland of the Mad Max universe is beautifully tragic. You will be able to build an ultimate car with thousands of modes to customize performance, armor and weaponry.  Brutalize your enemies in high speed, inter-vehicular warfare using combat vehicle and perfect war machine. In addition, you can traverse and discover a haunting post apocalyptic world with dynamic weather and landscapes.

On our Amazon Black Friday video games deals list, Gears of War makes in the list. This is stunningly re-mastered and modernized for Xbox one. The original Gears of War has been completely rebuilt from the ground up in full 1080p. Every aspect of the game includes lighting, characters, environments and cinematic scenes have been beautifully recreated. This game has original 19 maps remastered and six competitive modes including new Team Death Match and an updated King of the Hill.