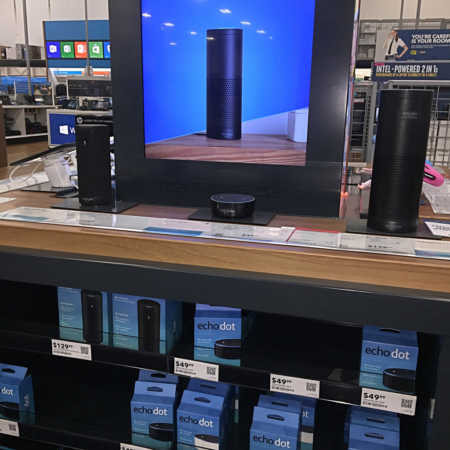 Trying to figure out what are the differences between Echo and Echo Dot? It wasn’t that long ago that voice-controlled speakers and smart home assistants were seen as science fiction. However, within a short time period, it became a reality with Amazon’s Echo, and other Alexa enabled devices. Although Amazon is not the only company to put voice recognition and internet interactivity into household devices, it is one of the most successful and best known currently available in the marketplace.

The Echo family has grown over the years with new devices being announced ensuring there is something for everyone. However, it can be tough to figure out which Amazon device should you get?

When it comes to deciding which device to buy, there are several features you need to note that will affect your decision. We’re covering some of the top features and differences that  you should know concerning the Amazon Echo and Dot Echo.

The Amazon Echo is a tall cylindrical tower. The Echo is 23.5 cm tall and 8.3 cm wide. The bottom half is covered by a speaker grille. The top has a ring of light that you can turn to adjust the volume. There are also buttons for activation and mute.

If you are not sure about which gadget to get, you can start with Echo Dot. Echo dot has a hockey puck shape. It looks like the top section of the original Echo without the speaker part of it. The diameter is 3.2 cm tall but has the same diameter. It also has the same light ring, but there is no volume ring. Instead, there are two more buttons on the top to control the volume.  The Dot has a 3.5mm port that allows it to be connected to an external speaker.

One thing the Echo and Echo Dot both have in common is that they have a micro USB charging port.

There is a 1.0 channel speaker. It means it is a single speaker with one woofer and tweeter. Compared to other WI-FI and Bluetooth speakers on the market, it provides a decent level of resonance and bass for listening to radio and music.

The Echo Dot has less audio power compared to the Echo. It is a great device for verbal interaction with Alexa, but the sound is very tiny.

The good thing is that the Dot can be connected to an external speaker so that all the audio is routed through that instead. It is also a good way of turning your ordinary speaker into a voice-responsive smart speaker. You can connect the Dot via Bluetooth or through plu 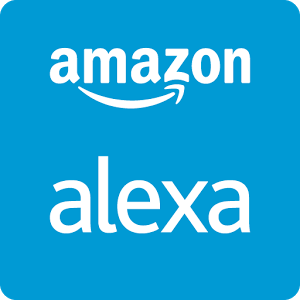 The Echo and Echo Dot both have Amazon’s smart voice assistant Alexa that can respond to basic questions and simple commands like the weather and play music. Both of them have a seven microphone system that ensures they are good at picking up voice commands from across the room.

However, if you get the Echo Dot, the recommendation is that the device should be placed at least 3 feet away from the external speaker so Alexa can hear the “wake word” among other requests.

It is designed to work alone as a standalone device. You do not need to use external speakers although it can be used to control other smart home devices.

Echo Dot works best when it is connected to an external speaker. There is a published list of Bluetooth speakers that have been tested and can work well with Amazon Echo Dot devices. The device is also expected to work with any speaker that has a 3.5mm audio port.

The Amazon Echo is definitely more expensive than the Echo Dot. It was priced right around $100 on our last price check though occasionally you can find it for up to half that price when an offer is being promoted via Amazon.

The Echo Dot 2nd generation is cheaper than the Echo, but you need to include the cost of an external speaker into your purchase since that’s required for the Dot to work. However, if you do decide that you want to buy Echo Dot and already have speakers that you can use with it, you can expect that the Echo Dot price will be about 1/2 of the cost of the Echo mentioned above.

Echo vs Echo Dot 2 –  Summary of the Features to Consider 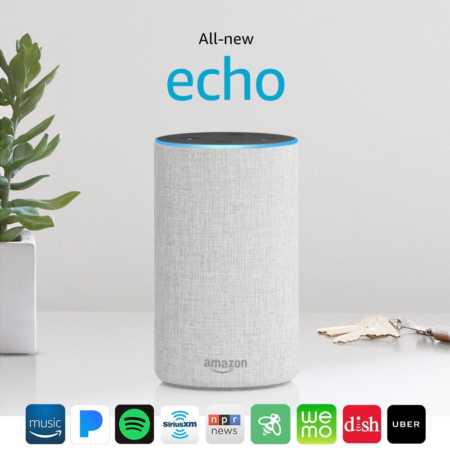 With the all new, 2nd generation Amazon Echo, you can control your music through Spotify, Amazon music and more by using your voice. You can call or message anyone using the device, and it has far-voice field recognition. It answers questions, reports traffic and weather, reads the news, reads audiobooks and does so many more things.

It comes ready to connect to your Wi-Fi and does not need additional speakers as it can work well on its own. The Echo has a 2.5-inch woofer with a 2.0-inch tweeter. It plugs into a wall outlet. It was replaced by the all-new Echo in September 2017, but you can still get the older models and versions if you choose. 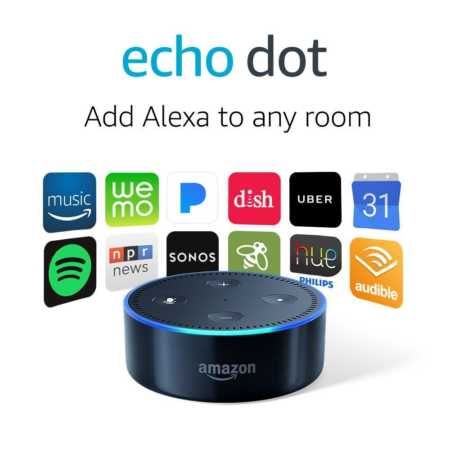 The Amazon Echo Dot 2nd generation is a voice controlled device that uses Alexa to do several functions. It connects to speakers through a 3.5mm audio jack that has to be connected to an external speaker.

It has a built-in speaker that enables it to work as a smart alarm clock and assistant in any room you place it. New features are getting added which makes it keep getting smarter. It comes ready to be connected with Wi-Fi. For those with several Echo Dot devices in their homes, there is a feature that states that only the closest Echo Dot will respond to the commands.

Now, there are also Google Home products that have their own collection of voice-activated devices. However, even though they seem similar, Amazon’s Echo devices have been around for longer and seem to have more of the “bugs” and glitches worked out. It also has more new devices. Whichever one you decide works best for you and your needs, do not get the Echo if you have Google Home and vice versa.  (And don’t forget – Check back for our review of Amazon Echo vs Google Home where we cover this comparison in detail!)

When trying to decide between the Amazon Echo vs Dot, it comes down to pricing as well as what you are going to be using it for?  With increasing applications and ways to incorporate your Echo product into your home and lifestyle, you’re going to enjoy either option moving forward!