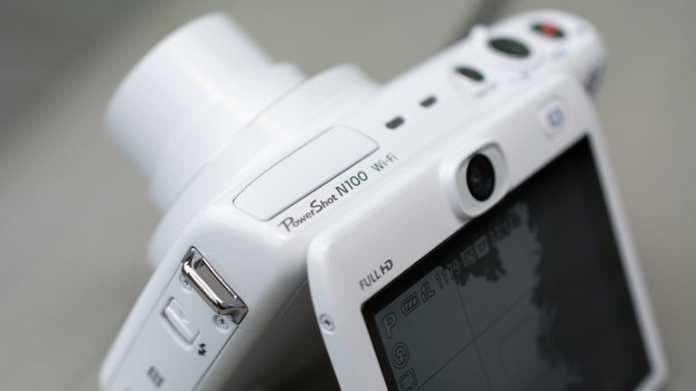 With Canon PowerShot N100, you can have your cake and eat it too. What that means is you can be part of every picture you take and also weave a creative story with all your pictures. Oh! And it doesn’t end here once your story is complete you can immediately share it with your family and friends using the built-in Wi-Fi and NFC technology allowing you to directly transfer your photos and videos to your social networking sites, mobile device or your computer. How cool is that! Amazed yet? Read more to find out.

The gamut of Features at a Glance 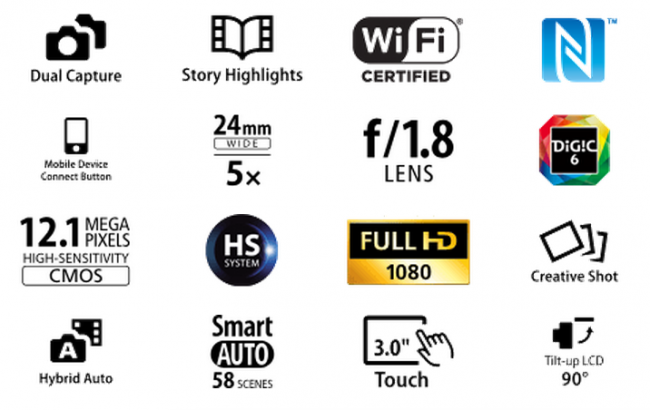 The PowerShot N100 seems to be larger than its predecessor the PowerShot N and the only visible difference is that it lacks the control ring around the lens. This is replaced with a shutter release button on top with a zoom control around it. One will notice there are comparatively few controls on the N100 and the build is glossy plastic and only comes in black or white finish. While it moderately comfortable to hold it seems a tad bulkier than average and is sometimes slippery on account of its glossy body.

On the top, you will find a pop-up flash and power button, the customary zoom rocker/shutter combination, and a dedicated HD video record button. The top mounted hinge keeps the camera compact when folded out.

There is a Mobile Device Connect button and a NFC sensor along the left side for sharing with compatible mobile devices. 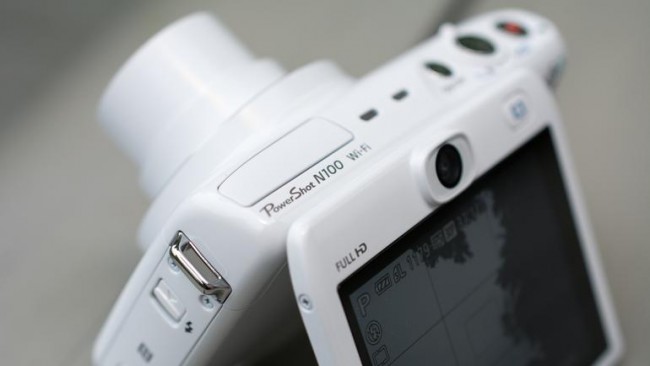 On the right side of the LCD touchscreen, there is a toggle switch to change between three shooting modes – Auto, Hybrid and Dual Capture. Just below that, there is placed a Star button to mark your favorite photos, and the standard playback and menu controls. Almost in the centre is the 4-way controller that allows quick access to Exposure Compensation, Macro focusing control, Flash settings, and Display settings. There’s a Func.Set button at its center, which is used to access the menu options while navigating or shooting. 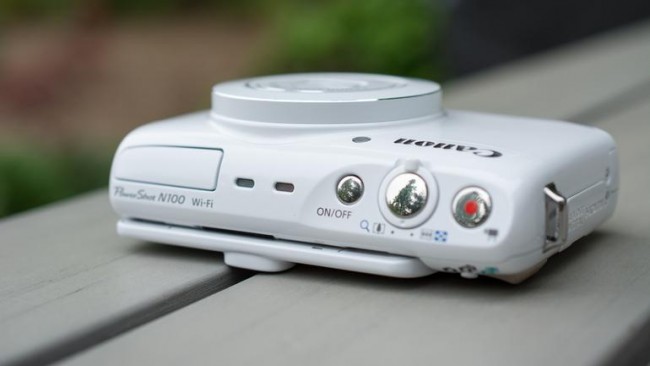 The rear 25mm lens is placed where one would expect a viewfinder, pretty confusing to some. The images can only be composed on 3.0-inch tilt, capacitive touch panel LCD that proves to be quite responsive. What’s unique is that the LCD touch panel can be tilted up to 90 degrees allowing you to frame shots, horizontally, or diagonally, or from low or high angles to get that perfectly accentuated shot. However, one mild disappointment is that it cannot tilt all the way to the front of the camera i.e. up to 180 degrees which would make taking selfies a breeze.

The camera has a micro HDMI port to connect to an HDTV, and a mini USB port to plug into a computer. It also includes an external wall charger for the battery so you can charge that extra backup battery. For memory the standard SD/SDHC/SDXC cards are supported.

In the Dual Capture mode, while the primary camera shoots the subject, the photographer’s expression is captured with a wide-angle 25mm lens sub-camera, labeled the ‘Story Camera’ to give you a complete picture, both sides of a coin we say. The images from both the cameras are then combined for an amusing picture-in-picture effect, with three sizes and four positions available for the sub-shot. You can’t even put a frame around the sub-shot. This works for videos as well so the person shooting it, could be superimposed as an anchor or storyteller in the video, just like in the TV.

The Story Highlights feature on the new PowerShot N100 camera allows you to create a video montage of recent events, a ready-to-share short reel ingeniously generated right on the camera from your stills and video, without using additional software. How clever is that?

The camera can create one automatically for you, a short video of approximately 2 minutes according to date, event or people. Alternatively, you can customize your Story Highlights reel for an engaging and exclusive video of up to five minutes.

The Story Highlights button on the camera helps you easily access the Story Highlights feature, just press to start creating your highlight album, once done it can be saved to the camera for quick replay and or shared with your devices (mobile/computer) or social networking sites using the N100’s built-in Wi-Fi®.

The PowerShot N100 camera is equipped with built-in Wi-Fi® technology that enables you to easily share your photos and video* with friends and family. You can connect directly your mobile devices (iOS® and Android™) and upload images via the free Canon CameraWindow App without the use of a computer. The Wi-Fi feature can also be used to sync your mobile’s GPS to geotag your photos, which is nice because this camera does not have built-in GPS.

That’s not all to this feature, you can also transfer images to other Wi-Fi equipped PowerShot cameras or print your photos directly to a PictBridge (Wireless LAN) certified printer or back them up on a computer which is on the same network as the camera.

Additionally, you can use your SmartPhone or tablet to remotely control your camera with Remote Shooting option thereby enabling you to shoot from a distance.

* Video can be uploaded one at time

The PowerShot N100 camera supports NFC (Near Field Communication) technology, eliminating the need to find and open the Canon CameraWindow app on your mobile device. The Mobile Device Connect button allows you to designate in advance, a SmartPhone or computer that you will connect to at the push of a button. Pressing it will turn on the Wi-Fi, after which you will open your mobile device’s wireless settings and select the camera in the Wi-Fi list, then open the Camera Window app to complete the process.

If the Camera Window app hasn’t been installed you will be directed to download it from Google Play.

While capturing photos and videos by hand, especially when held for long, you are ought to give your camera the occasional shake, making your photos and videos blurry. Here the cameras Canon Optical Image Stabilizer comes to your rescue.

It allows shooting at slower shutter speeds for photos thereby accommodating more low-light shooting situations without having to advance the ISO sensitivity, the result being a sharper, steadier image. There is also no image degradation that comes with using electronic image stabilizers since it is an optical system. 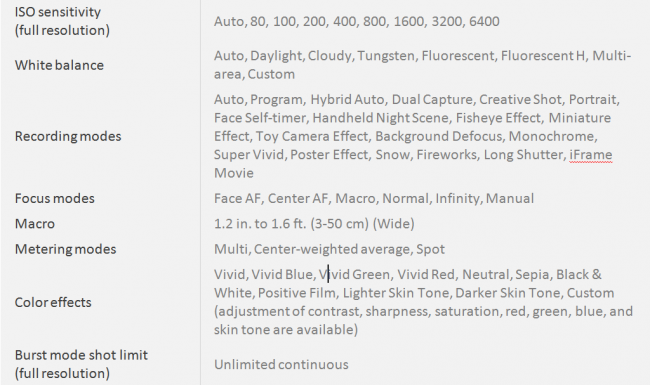 Picture quality is significantly enhanced as compared to its sibling the PowerShot N. The DIGIC 6 Image Processor drives the Canon HS SYSTEM for image quality and enables high-quality captures particularly in low light conditions, which in our opinion is a big win over the popular SmartPhone cameras.

Up to ISO 200, the camera does well with noise and image detail, above that some noise reduction kicks and as a result image detail is softened to an extent but overall there is ample fine image detail. Avoid using ISO 3200 and 6400 as at these high sensitivities, noise reduction becomes more evident and colours appear to be desaturated. You can stick to below ISO 1600 for indoor or low-light conditions when zoom is not in use thanks to the bright f1.8 lens.

The Imatest results on sharpness of lens throughout its zoom range show that the camera surpasses the benchmark (1,800 lines per picture height) with 1,857 lines at the widest angle, 2,191 lines at the midpoint section of zoom, and 1,924 lines at its extremes.

Imatest also checks images for noise and the results show that mage noise for the N100 is less than 1.5 % through ISO 1600, which is better compared as to other compacts, the credit for this goes to the N100’s reasonably large image sensor and low pixel count.

The N100’s main lens is a 24-120mm f/1.8-5.7 (35mm equivalent) zoom similar to the PowerShot S120 that ensures clear, bright, luminous shots. It manages to filter in a lot of light but at its widest angle its aperture narrows significantly when zoomed. The N100 doesn’t support RAW image capture.

The zoom range is lesser when compared with other cameras in its category using smaller 1/2.3-inch image sensors like the 10x Sony Cyber-shot DSC-QX10, but on the bright side you get a picture quality that is as good as the premium cameras like the S120 that too, at a decent price.

With respect to operation, the point-and-shoot tasks can be performed with relative ease. One let-down is that the autofocus isn’t as fast as with other models of Canon but it is decent enough. Although it’s slow at about 2.5fps, there is an option to continuously shoot with autofocus, a feature that is lacking in most cameras of this class.

Shutter speed is relatively quick with a lag of only 1.1 seconds between shots but using the flash increases the lag to 2.7 seconds. Shutter lag is short at < 0.2-second in bright conditions but longer in low-light conditions and also when lens is fully zoomed in at 0.5-second.

The HD video captures are also very good but noisier in low light. The zoom works quietly whilst recording to avoid unnecessary sound capture by stereo microphones just above the lens. With the power of the DIGIC 6 Image Processor, videos can be captured at 30 frames per second in the popular iFrame® Movie or MP4 formats. 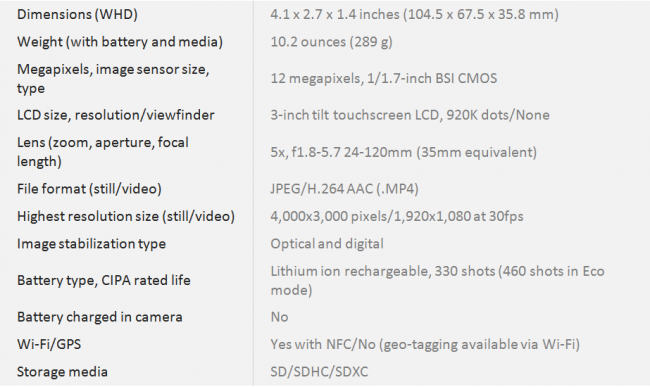 What made the customers happy?

What made the customers unhappy?

With SmartPhone cameras leaving less to be desired from the Compact Camera segment, Canon has taken a bold step to introduce the PowerShot N100 which brings forth a new era of compacts specially designed to take on the widely popular camera phones.

While it comes with a decent set of features for a compact we have find it to be a bit over priced considering it still lacks some pet features. But considering its premium image quality, fast performance, integrated Wi-Fi and NFC for quick sharing, and a good responsive touch-screen display, it doesn’t seem like a bad deal.

We expect the next line up of this series will include some of the features left out in this one like RAW capture and better zooming ability.

Interestingly it has been branded as the ‘Story Camera’ to attract those photo enthusiasts who like to play around and have fun with it.

That’s our version of the story, what’s yours?